Scrap the fastest and furthest cycling records, we’re here for the wacky! Check out all the most insane records in the world of cycling below.

The Guinness Record for the longest distance travelled while cycling backwards was set by absolute madman Australian Andrew Hellinga in October 2013. In 24 hours, he rode 337 km or 209 miles backwards with only a brief stop at 182 km or 113 miles. Remarkably, Andrew took on this challenge to raise money for children in Zambia and set this amazing record in the process. Absolutely good on him for setting an insane World Record for a cause! 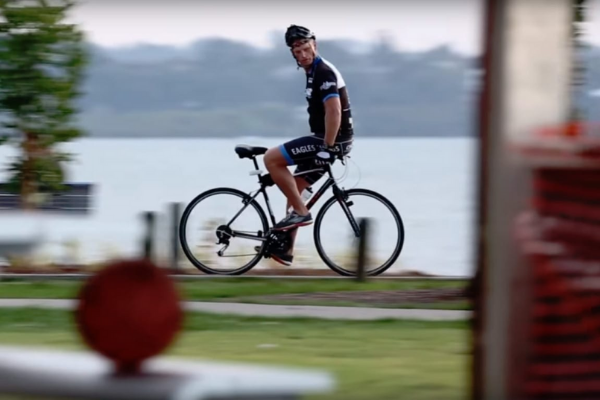 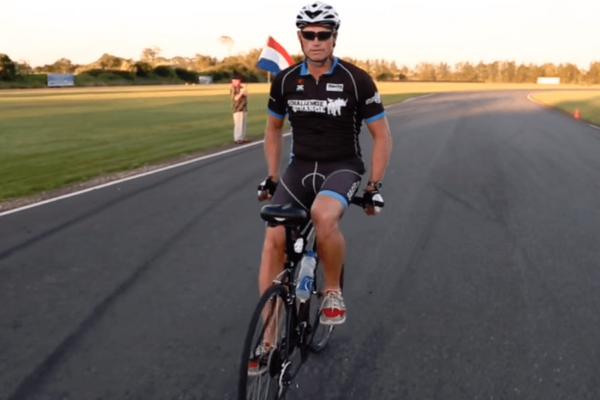 Instead of riding a bike on a normal surface, you know, like the ground, German-born Jens Stotzner, decided to wear scuba equipment and ride underwater. Notably, he did this in the effort to break a World Record and a world record he did break. In September 2013, Stotzner cycled 6,708 metres at the bottom of a swimming pool for nearly 5 hours. That’s 78 laps of an 86-metre course set out at the bottom of the pool. Interestingly enough, Jens was not the sole person trying to take on the record at the same time. Here’s the video in case you don’t believe this actually happened! 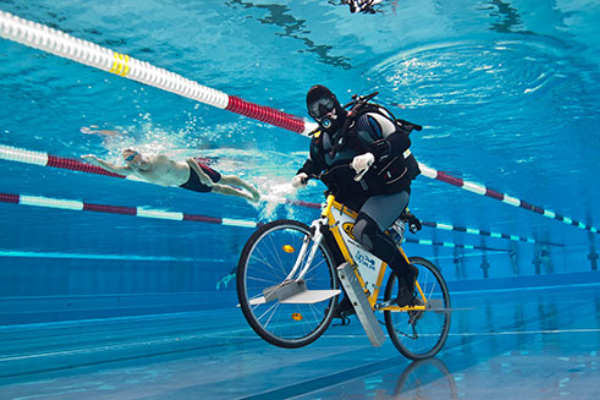 If you think the previous cycling underwater record is insane enough, then hold your horses, because here’s one to top that. Italian, Fabio Falla cycled 67.60 m underwater without oxygen. Yep, no scuba equipment this time! Falla accomplished this achievement in Italy in August 2013. Looks like 2013 was a hot year for underwater cycling records! 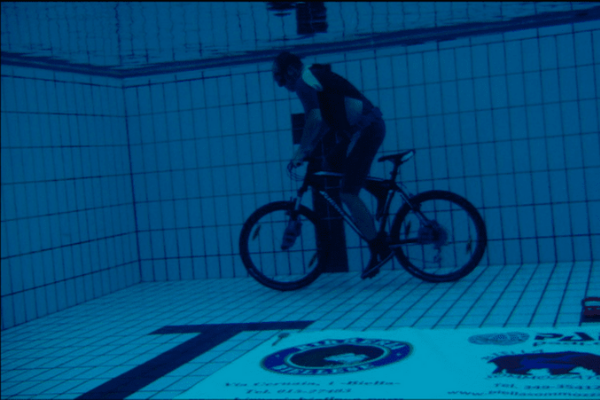 4. Most Rubik’s cubes solved on a bike

Feel like you have some free time in your hand while your feet are cycling? Arumugam PK of India decided to solve some Rubik’s cubes during his ride. Well, it was more than ‘some’; being exactly 1,010 Rubik’s cubes solved in over 6 hours! This accomplishment was made in June 2017. It was incredible since many of us can’t even solve one sitting in a chair. 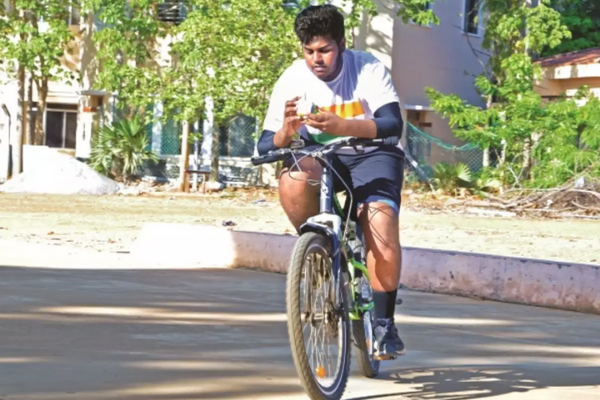 We introduce you the tallest rideable bicycle in the world! The “Stoopidtaller” bike was built by American, Richie Trimble in Los Angeles in 2013. This beast was 6.15 m high (20 ft 2.5 in), measured from the ground to the handlebars. To set the record, Trimble had to successfully ride the bike 100 metres. He shared that he originally created this bike to see people smile and laugh. However, more significantly, Trimble promised himself to break a world record and “bring it back to LA, where the world record belongs.” Well, he sure did that!

Here’s a video of the making and breaking world record of the “Stoopidtaller:

So, we’ve gone tall, how about long? A creative group of Australians crafted a 41.42 m (135 ft 10.7 in) long rideable bicycle in January 2015 in Australia. To plan and develop this record-breaking bike, which is longer than three buses, the constructing team worked for nine months. Then, to prove that the bike is “rideable”, they had to ride it over a distance of 100 m without riders touching the ground. Well, unsurprisingly, the riders toppled a few times before successfully pulling it off. 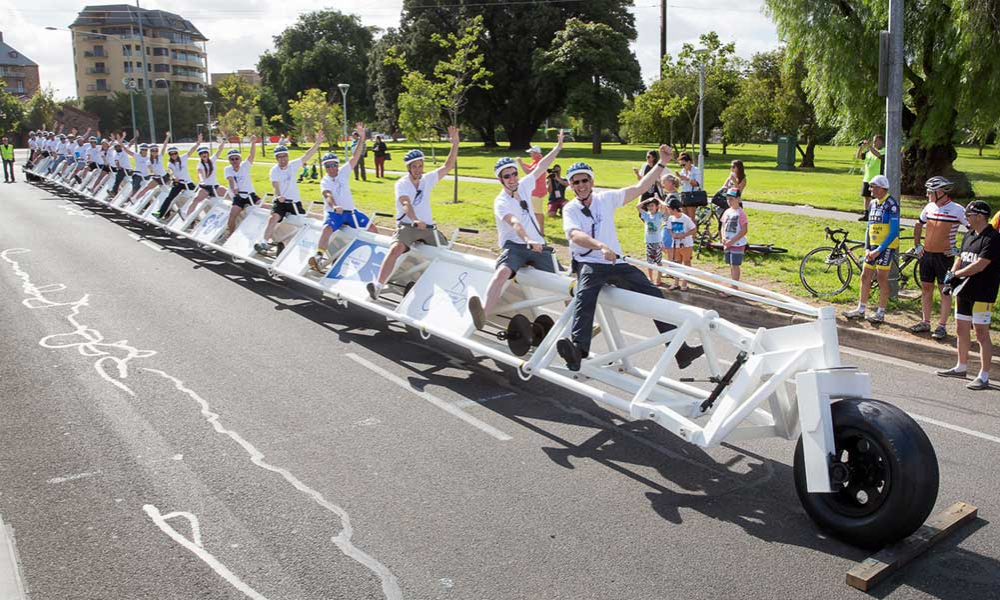 Apparently, the sky is the limit, or the bottom of the sea, or maybe there isn’t any limits anymore, we’ll see what the future holds! Human’s creativity and resolutions have no boundaries. Especially at Reid, we believe that on two wheels, so much more can happen in life. You may not break a world record, however, at least you try to do things differently. Whether climbing the winding country roads, bombing down a coarse mountain incline or commuting to your city job, we’re here to give you everything you need to get out there and explore your freedom the way you want to.

So, if you’re looking to break a world record or even just get into cycling for the first time, then we design and manufacture premium quality, affordable bikes for every kind of rider: novice to experienced, casual to obsessive, style-conscious to technically-minded. We also keep the costs down on our bikes (despite offering a lifetime frame and rigid fork warranty), as the joy of cycling should be accessible to everyone.

Well, if you want to get that feeling of freedom a bike gives you without breaking the bank, check out our wide range of bikes here! 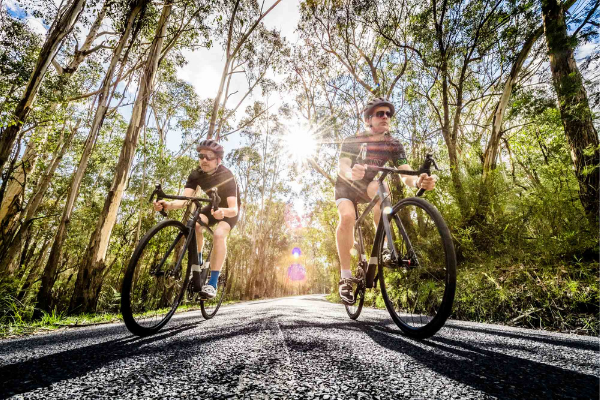 DIY Ways to Pimp Your Bike

Reid Rider of the Month – June